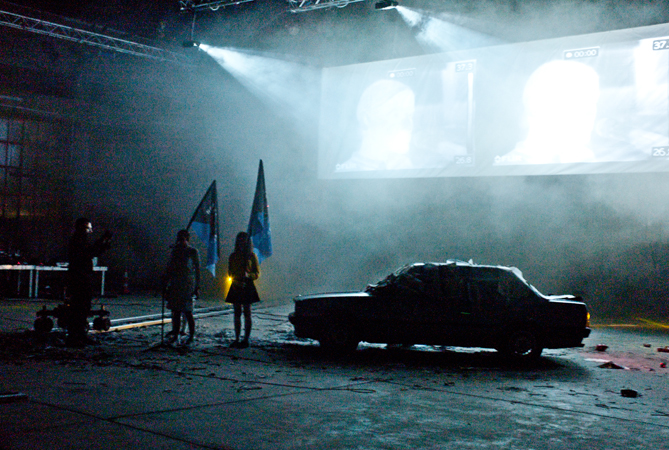 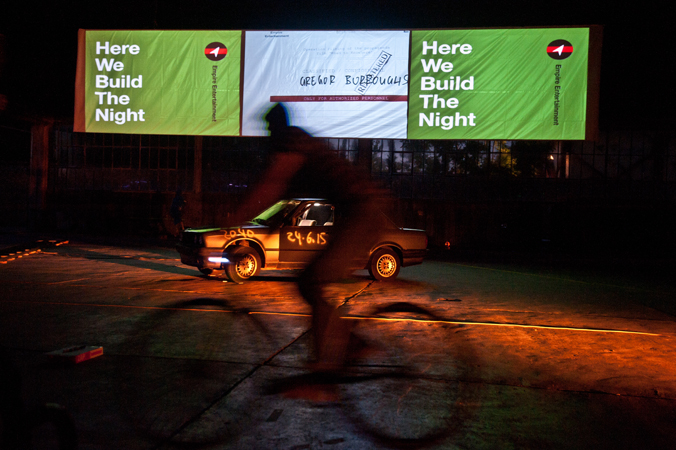 In the context of ART IN RESISTANCE | An artist talk will be held on November 1 at 10 p.m. at the lecture stage (Gasteig).

Eiffel Tower, Godard, Vichy, the Colosseum, Pasolini, the R.A.F., the imperial city of Berlin, and the Deutsche Bank building: ROAD TO KNOWWHERE describes an audio-visual journey through Europe. Two voyagers encounter different people on the journey.
Influenced by the films of David Lynch, Steven Knight and Terry Gilliam, by the dérive of the Situationist International, the car accidents of James Dean and Albert Camus – facts, persons, situations, and noises pass by us, and create the story of the continent. Underway in Rome, Paris, and Berlin ROAD TO KNOWWHERE examines the relationships of politics, power, and image.

The Erasers: UROPA – A ROAD TO KNOWWHERE on facebook

The Erasers @ Mapping Festival 2011 from mappingfestival on Vimeo.

READ MORE:
Cast
Concept and direction The Erasers + DEAD CLASS Performers Giorgos Kakanakis und Christos Passalis Live cinema editor Sotirios Mitsios
Biography
Founded in 2006, The Erasers is an Athens-Berlin based performance company that creates audiovisual productions with the aim to extend the boundaries of theater. The Erasers’ productions blend stage performance, real time cinematics, text, video, sound, and internet to tell stories about human experience in the 21st century. The combination of these diverse elements is based on The Erasers search for a new audio-visual language. The Erasers goal is to create an overall experience, a new »open« work, in which the audience can be immersed and yet have the freedom of interpretation.
Production and realization
Realisation supported by the European Union, as part of the »Creative Europe« program and the Allianz Cultural Foundation