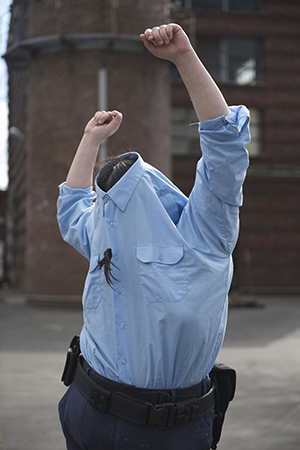 An artist talk will be held after the show on October 29 at Schwere Reiter.

The project UNI * FORM is a new chapter in the mutual artistic work of the filmmaker Jorge León and the choreographer Simone Aughterlony. Seven performers are onstage in police uniforms. The clothes give them power; however, they seem to have forgotten how they can exert this power. The uniform represents a certain function, but the actions and interactions of these performers underline the paradox between blind classification and an alienated perception of the self. A changeable landscape is established here, in which domination and submission are mutually dependent and defy a basic idea of duality. The performers are not automatically entitled to power, but rather the power is continuously created in its exertion.

READ MORE:
Cast
Concept Simone Aughterlony and Jorge León Created with and performed by Simone Aughterlony, Davis Freeman, Nada Gambier, Kiriakos Hadjiioannou, Jen Rosenblit, Hahn Rowe and Gary Wilmes Dramaturgical  advice Saša Božic and Alain Franco Music Hahn Rowe Light design Florian Bach Costumes Judith Steinmann Body object design Marion Montel and Judith Steinmann Technical direction Ursula Degen Production management Michael Nijs and Sina Kießling With Daniel Benning, Fynn Feigl, Ben Moculescu, Lara-Sophie Schwerzer-Engel, Leopold von Grafenstein, Ida Göbl, Anna Riemer, Caroline Völk, Vanessa Holste
Biography
Simone Aughterlony is a freelance artist and she works primarily with contexts involving dance and performance. She lives in Zurich and Berlin. In addition to many other artists, she has worked together with artists such as Meg Stuart | Damaged Goods; Forced Entertainment; and Jorge León. Her performances | choreographies deal with the transformative potential of bodies and with everything that is choreographically conceivable. She is interested in the possibilities of humor, in the mystery of desire, and in pushing the political effects of a performance to the limit. Jorge León studied at INSAS Film in Brussels and specialized as a director and cameraman of documentary films. He has worked as a photographer and a video filmmaker with, among others, Éric Pauwels; Wim Vandekeybus; Thierry De Mey; Xavier Lukomski; Olga de Soto; Ana Torfs; and Meg Stuart. In 2010 he created for Kunstenfestivaldesarts in Brussels his first theater production, entitled DESERVE, in collaboration with Simone Aughterlony. Among his documentary films are DE SABLE ET DE CIMENT (2003); VOUS ÊTES ICI (2006); and BETWEEN TWO CHAIRS (2007). His most recent films, 10 MIN. (2009) and VOUS ÊTES SERVIS (2010), were screened at festivals worldwide and have received several awards. His film BEFORE WE GO (2014) was nominated for and received an award at FIDMarseille 2014. In 2015 he received the FIPRESCI Prize for this film.
Production and realization
Production SPIELART Festival Munich, Kaserne Basel, HAU Hebbel am Ufer Berlin, Charleroi Danses – Centre cHORÉOGRAPHIQUE DE LA Fédération Wallonie-Bruxelles, Théâtre de Liège, Gessnerallee Zürich, de facto Zagreb, BIT Teatergarasjen Bergen, Théâtre Garonne, Scène européenne / Toulouse, House on Fire (with the support of the Culture Programme of the European Union) and Zürcher Theater Spektakel. Supported by the NATIONALES PERFORMANCE NETZ (NPN) Coproduction Fund for Dance, which is funded by the Federal Government Commissioner for Culture and the Media on the basis of a decision by the German Bundestag, Zagreb City Councile for Culture, Ministry of Culture of Republic of Croatia, Kultura Nova Foundation, Fachausschuss Tanz & Theater BS/BL, Stanley Thomas Johnson Foundation, Stadt Zürich Kultur, Kanton Zürich Fachstelle Kultur and Swiss Arts Council Pro Helvetia. Special thanks to UferStudios Berlin and Myriam Van Imschoot. With friendly support of Kim's Kindertanz.